Contributed by: #2JBrumfield
The winningest manager in Toronto Blue Jays history was one of the special guests of honour at the 9th annual Vancouver Canadians Hot Stove Luncheon. 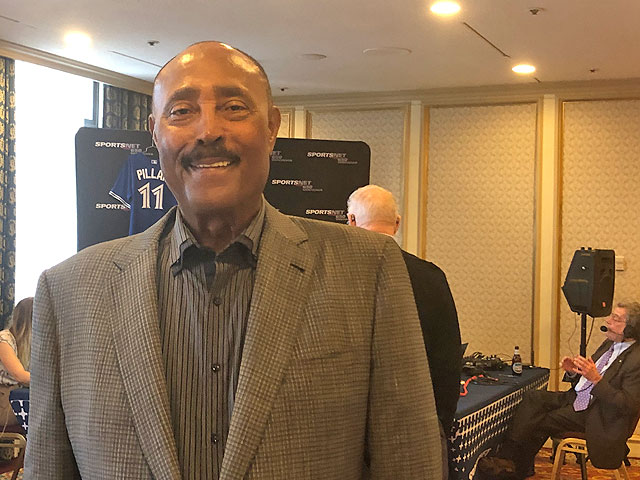 Cito Gaston at the Fairmont Hotel in Vancouver prior to the Vancouver Canadians Hot Stove Luncheon. Blue Jays president emeritus Paul Beeston is in the background (bottom right)  chatting with the radio crew at Sportsnet 650.
Cito Gaston spoke with the local media prior to the luncheon where he addressed a number of topics, beginning with his thoughts of Vladimir Guerrero Jr.
"I have not seen him. I hear a lot of good things about him and of course, we all know his Dad and the kind of player he was. The only thing is I think he has a little bit more discipline at the plate than his Dad did but his Dad still managed to make contact no matter if it bounced before it got to the plate. I know the organization has been expecting big things out of this kid. He's young, he's strong and I think he's ready to go."
On the impact Vladdy Jr. could have on the fanbase.
"Well absolutely, not the only fans in Toronto. The Blue Jays are a Canadian team so it goes all the way out here even to Montreal where I know the people will connect quite well with him with his Dad playing there so I think it's great. I guess they have their reasons but they did not bring him up last year at the end of the season. I just hope he's not upset about it and he goes to Spring Training and wins the job at third base or wherever they might want to play him."
On who else on the team impresses him.
"I think (Vladdy) does more than anyone from what I hear. I don't really work for the Blue Jays anymore so I'm not around to see all those guys anymore. I isolated myself up in Michigan in a place called Boyne City, Michigan. It's on the lake and we don't have dry cleaners here. I'm kind of out of the mix when I come to Toronto. I speak with (Paul) Beeston once in a while. He says he doesn't work for them but he's still around there so I'm not sure. (laughs)"
On how closely he follows the game.
"I still follow baseball, just not as closely as I did in the past because I would get to know those kids when I went to the ballpark. I think one of the best things that ever happened to me when I was managing, and certainly not to baseball, was when we had the strike and we had the extra month in Spring Training. The whole time, this organization did not make us go and work with replacement players. Paul Beeston was responsible for that. We got to know the whole minor league and I got to know every kid in the minor league in that month which was great. I think big league coaches need to do that too."
On how much the game has grown in Canada.
"Absolutely. I can remember years ago, we'd come to Seattle and you would see those kind of fans there. There's a lot of fans in Seattle when the Blue Jays are in town wearing a lot of Blue Jays shirts, t-shirts or whatever. I think it's expanded quite a bit and hopefully it keeps going.I hope people are patient a little bit with this team. I think there will be a couple of years where they'll really start to do something and maybe they might surprise like the Atlanta Braves did last year."
On how playing in front of sell-out crows at Nat Bailey Stadium helps develop players.
"It does a lot because they have good owners here, good people here and they have had good teams here so that certainly helps a lot. A lot of people that live here get to see these kids here before they get to the big leagues."
On how much he is asked about the World Series teams of 1992 and 1993.
"I get it a lot but you know, I lived in this country for 20 years so this is like my second home. I recently moved out of Toronto three years ago and every time I go back, I hate that I did so you know, Canada's my home too. It's something that I think I enjoy more than I did when they were happening because you were pretty busy. Now I can sit back and think about it if I can remember most of it and think about how great it was and all the fun we had."
On the recent induction of the late Roy Halladay.
"Well, you know it's great for me. I know it's good and sad for the Halladay family because I'm sure that brings back memories but also they got to be very proud, the kids of their Dad and certainly his wife. Unfortunately he's not here with us so he could go up and make his speech but I always thought he was a Hall of Famer. I was with Doc when he was going bad. I was with Doc when he first pitched the first game for us in Spring Training and Joe Carter ran into my office and said we got to take this kid with us and I said, 'Well, I don't think so but we can keep him a little bit longer if we leave him down there one more year.' I'm so happy for his family and we miss you, Doc."