The Canadian invasion of T-Mobile Park in Seattle takes place this weekend as the #BlueJays take on the Mariners. #LetsGoBlueJays #TrueToTheBlueJays 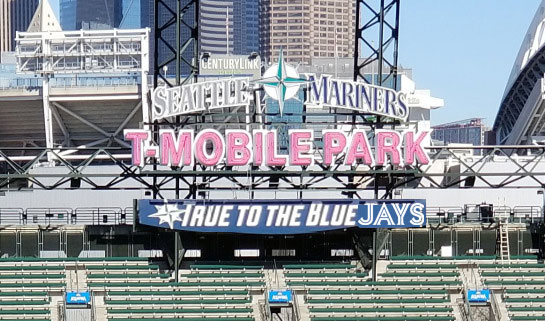 This is Players Weekend so all MLB teams are wearing nickname jerseys as a result.

Not surprisingly, the Jays were swept by the Los Angeles Dodgers with the last two games being walk-off losses. Toronto is at 52-78 for the season and are in a battle with 52-75 Pittsburgh for the fifth overall pick in the 2020 MLB Draft.  Detroit (38 wins), Baltimore (41), Kansas City and Miami (45 each) are pretty much out of reach.

Seattle is at 54-74 after winning two out of three in each series of their road trip that took them through Detroit, Toronto and Tampa Bay. They've used a lot of players this season.

With September looming, do not expect a lot of call-ups according to Rob Longley of the Toronto Sun.

Up Next - Two games against Alex Anthopoulos' Atlanta Braves at the Dome Tuesday.