Or the Derek Jeter Affair in 2003? These were sad, sad days in the Greater Toronto Area, my loyal and loving readers. Oh, not Jeter getting hurt, the loss. The loss was sad.

But those sad days are gone! Like Robbie Alomar homering off Eck in 1992, yesterday's game was a turning point for this franchise.

Who am I kidding? It's only one game.

However, since sabermetrics have not yet reached the analysis of television broadcasting, there is no such thing as small sample size when it comes to Sportsnet. So I shall share with you my thoughts on the look, feel, sound, taste and smell of the Toronto Blue Jays 2005 on Rogers Sportsnet!

I hope the television broadcasts continue to be as good as they were yesterday, because I don't want to listen to the radio this year. It's too bad, because I know I'll miss Jerry in about two weeks.

Some highlights from yesterday:

Therefore, I award the picture of this creepy laughing British guy to Chuck Van Den Corput, since making fun of the elderly never gets old. Am I right, Magpie? 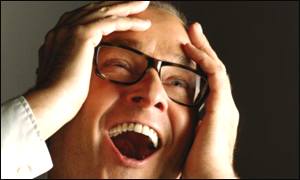 So...did I forget anything? Oh, of course! You can't have a Rob-written Game Report without one of these! It's a pretty bland one today, as Doc was more or less solid throughout the game. And here are your articles of note:
Fordin: Jays back Halladay with the bats
The Baseball Guys: Free For All: How Many Wins in 2005?
Schwarz: Setting the record straight
Chastain: Brazelton hangs tough in Rays' loss

Does anyone have anything else read-worthy?